Nigeria more than any of  its African counterparts is a country where students do not study, public workers do not work, ministers do not administrate, and where cunning religious clerics & online fraudsters hold the order of the day. 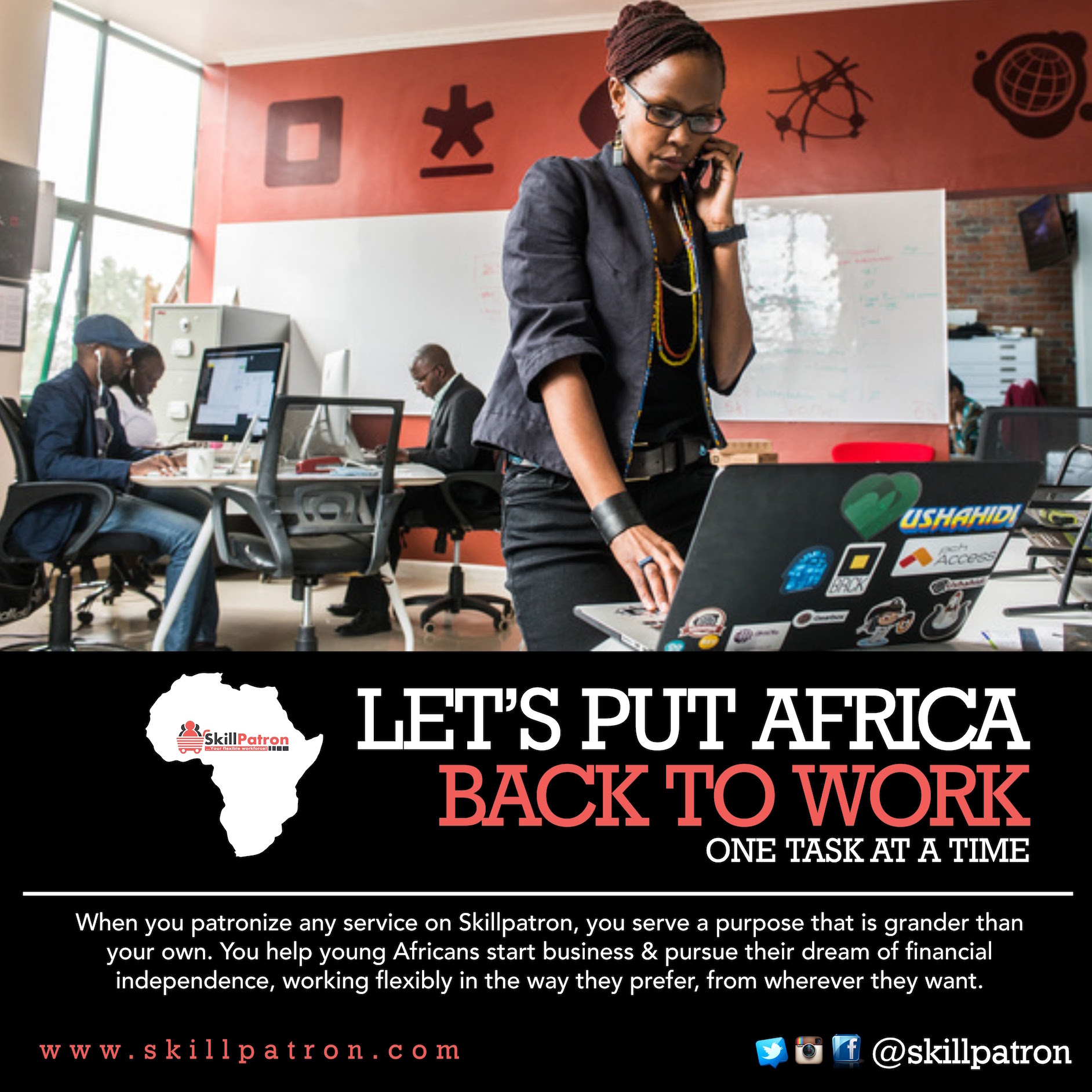 In the next 35 years alone, two billion African babies will be born; if  “An African Planet” by Dan Roodt, American Renaissance is anything to go by.

With all the media bursting with news of Africa’s potential economic power, the sad truth is there’s a huge possibility that Africa’s “economic miracle” will never happen. As the population grows, survival will mean only one thing: emigration. The bright lights of Europe and North America–and of South Africa for those who cannot manage to leave the continent–will exert a hypnotic attraction. Many Africans will buy plane tickets financed by their relatives already overseas, or by Western aid money, and those who cannot afford to fly will pile into rickety ships to cross the Mediterranean. The African avalanche is inevitable.

Africa has become one unrivaled biological, ecological, and socio-political venture: It is fast becoming the scene of the biggest population explosion the earth has ever seen. According to authoritative figures published by UNICEF in 2014, the number of Africans will grow from 1.033 billion in 2013 to a mammoth 4.2 billion in 2100. In the next 35 years alone, two billion African babies will be born. By 2100, half of all children on earth will be African. These are not simply straight-line projections of present trends, but the best estimates based on current data and historical precedents. This population explosion has huge implications not only for Africa but for the entire world.

It’s very easy to look at the data and conclude that Africa represents an opportunity. It does, but it’s not low hanging fruit and only those willing to get their hands dirty, deal with many hurdles, and invest for the long term have a chance of success. Markets are fragmented, there are numerous different dialects by country, there’s a “cost of doing business,” capex investments are risky due to unstable politics, and much more. In fact, other emerging markets represent bigger opportunities. 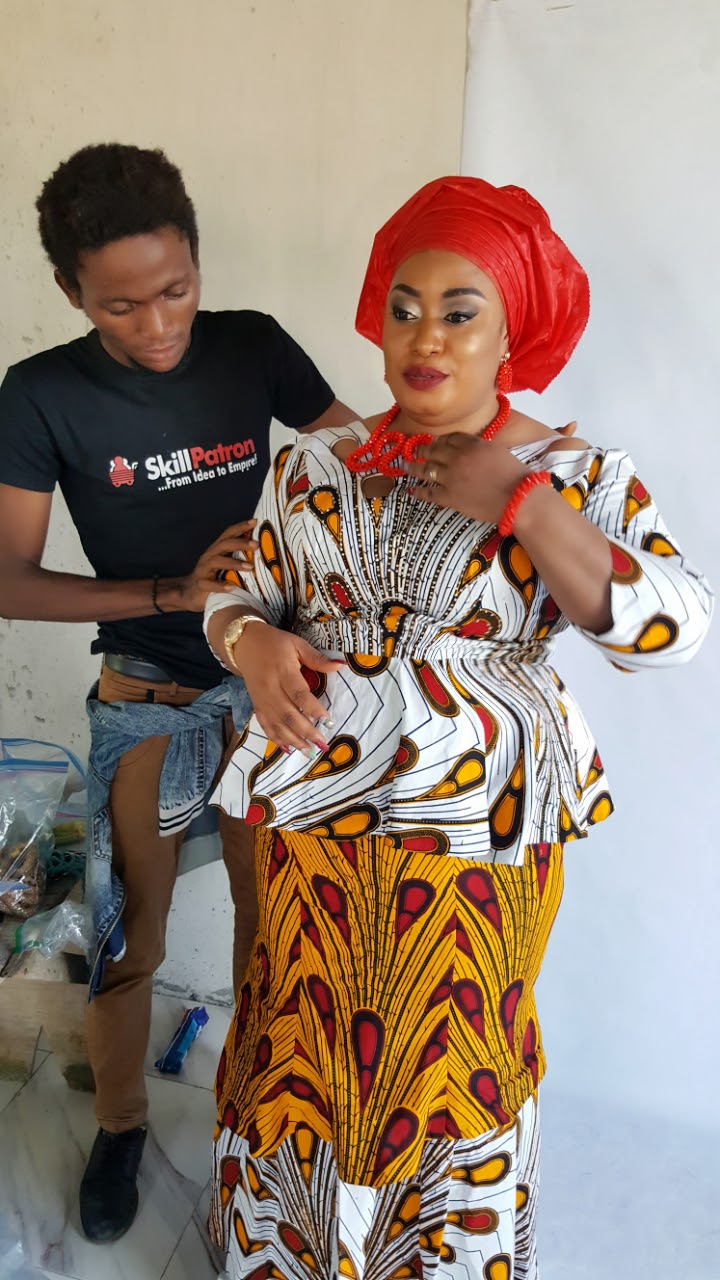 One of SkillPatron’s project managers prepping up a model for one of our product photography shoots – Victoria Island, Lagos.

Let’s face it, while our continent is still focused on exporting commodities and goods, even the Asians are heavily exporting their services to clients all over the world.

Africa will probably never be a manufacturing hub, unfortunately, for the simple reason it doesn’t have the infrastructure, be it logistics or electricity, to be an export platform and despite China’s continued FDI in Africa showing no sign of slowing anytime soon. We do not see why China would build infrastructure to compete with itself.

To any foreigner, the perception of Sub-Saharan Africa is chaos – War, national insecurity, abject poverty, human rights oppression, looting political leaders, chronic illiteracy, frequent labour strikes, the infamous cyber-crime, youngsters, hunger, malaria, tribalism and Ebola… these are the common western images conjured up at the mention of Sub-Saharan Africa, not to mention the ever increasing rates even of African unemployment especially among its youth.

One dangerous angle about Africa’s youth unemployment rates is the fact that a vast majority of its young population (Africa’s future) are either unskilled or lack the knowledge/channels to market their skills and earn a decent living. Most young Africans want the safe security a paid job offers, yet the private sector in most African economies is so small that very few companies have the patience and resources to train new talents to fit into their company’s payroll.

The main problem with the job market in Africa is that it is largely disorganized. It is quite difficult for businesses and employers to find potential employees with the right skills, education, motivation and experience for the positions they want to fill. 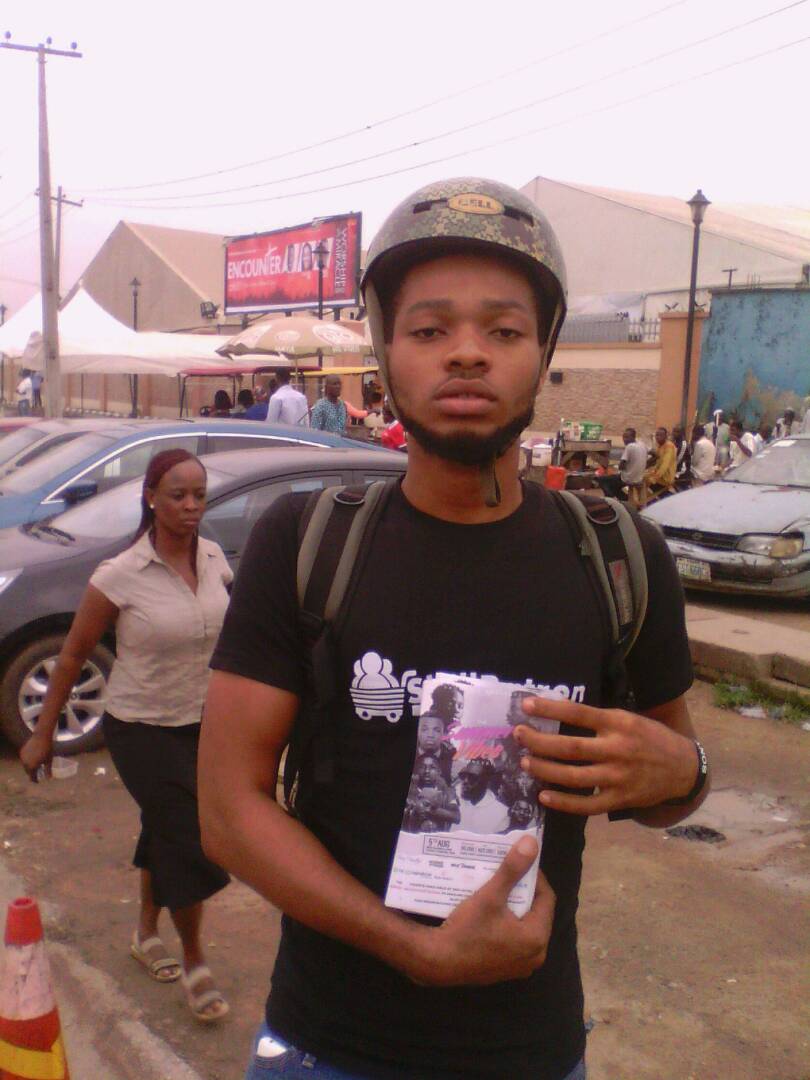 One of SkillPatron’s project managers who oversee hundreds of our leaflet distribution & flyer marketing campaigns for our clients – Lekki, Lagos.

How is this problem being solved?

Driven by motives ranging from charity to profit to a renewed “white man’s burden,” the developed world has during the past half-century poured money into the African continent to combat these ills.

For one thing, the early signs are encouraging. Literacy and education rates are skyrocketing. More facts and statistics are backing entrepreneurship as the best driver of economic expansion on the continent.

It’s tempting to patronize a bit and characterize these entrepreneurs as “African solutions for African problems,” seeing them only as incubators for social enterprise. However, Westerners still tend to hear about these startups and call up pictures of mosquito nets, clean water, cheap or no lighting and malaria vaccines. Yet the reality is that with more skilled African’s becoming entrepreneurs their companies will compete in the same markets to distribute the same products as western ones, albeit with new tactics.

As Jason Njoku (IrokoTV) rightly noted on his blog, events in the tech startup scene have become evident that seeds are not enough, as is the case with Rocket’s Jumia umbrella approach, Efritin.com, SoRepairit.com, Bus.com.ng, Pricecheck Nigeria, to mention but a few.

The greater problem is there is not yet critical mass in having the right blend mixture of dreamers, builders, money, and support that let innovative businesses sincerely disrupt Africa.

UpWork (formerly élance-odesk), Freelancer, Peopleperhour & Fiverr who are all making giant strides in disrupting the informal labour market space do actually show that disruption is possible. But almost every single product that Western tech companies target in the developing world are developed in American or European startup hubs — by developers & founders who have never heard of ‘danfo’ buses, used Internet in the absence of electricity or had a user-experience case study that includes a Nigerian bus conductor or a Kenyan illiterate farmer.

Recently it’s becoming very difficult for Nigerians and their African counterparts to get jobs in UpWork, Fiverr and other major global freelancing sites simply because most clients prefer freelancers who are not from Africa. 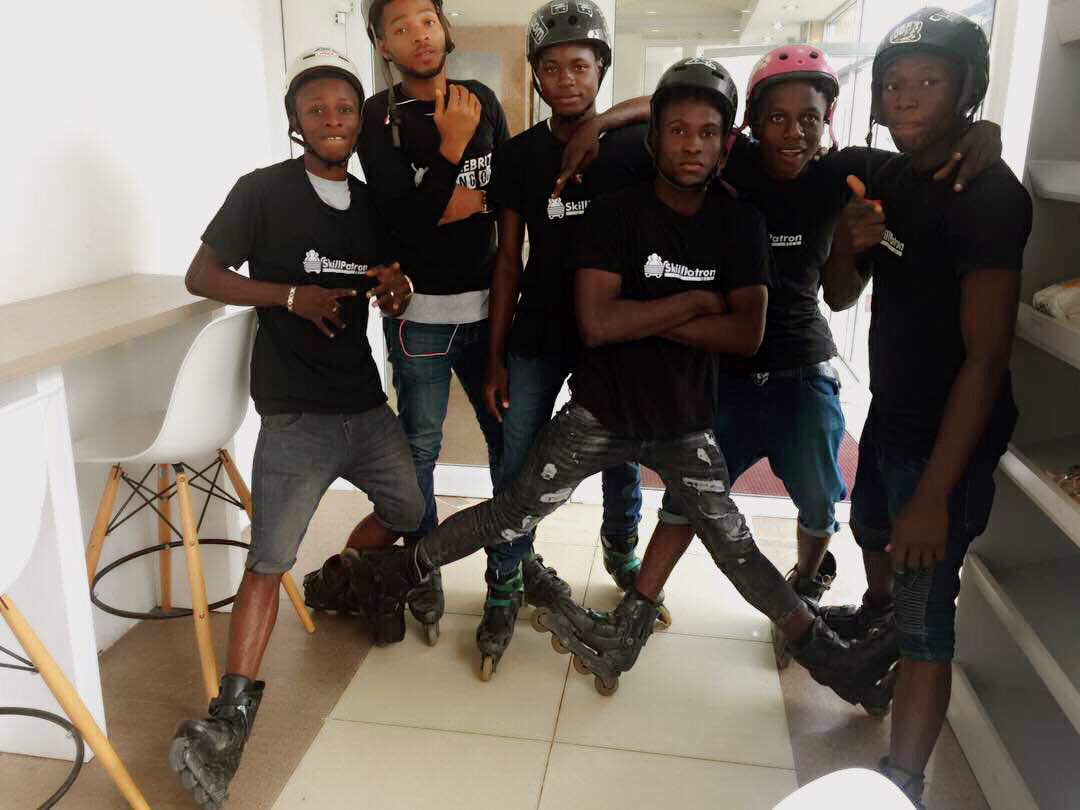 How do we believe this problem should be solved?

Part of the simple solution to the problem of unemployment in Africa is to create an entrepreneurial culture that is difficult to teach in a classroom.

The biggest gap is between the builders and the dreamers and also between Africa’s local businesses and unskilled unemployable young Africans. Until Africa’s best and brightest decide to learn new marketable skills to start a business and quit waiting on their governments to give them mediocre jobs in addition to staying in Africa, instead of ignoring it or fleeing it, there will be little headway in creating a tech-driven informal labour ecosystem that innovatively confronts the opportunities and challenges of the continent — because no foreigner can truly understand Africa like we do. 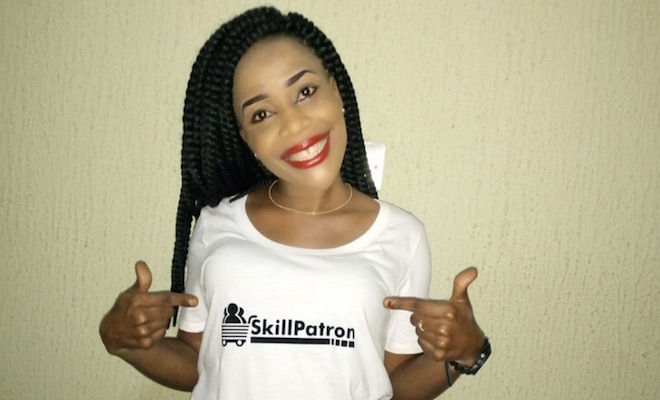 So why is this a call to action? Are you a dreamer? Business owner? Skilled professional? Are you a builder? Don’t build the next business or ply your skills in Europe or try to build the next WhatsApp in America, come to Africa. As long as you’re African or born to parents who are!

After all, when it comes to it, We all have a collective responsibility in using technology to tackle Africa’s vertical myriad of problems, including education, security, hunger, infrastructure etc (in our case the burgeoning unemployment among young Africans younger than 30 years).

Upon any less condition, than overpopulation threatens, Africa’s future looks golden. Perpetual Africa naysayers need to wake up to this inevitable reality.

It is still estimated that 30% of the African population is below the poverty line, mainly due to lack of quality educational standards leading to an unskilled workforce and thus a shortage of development in our agricultural and industrial sectors. Unemployment is well over 45%, mainly due to lack of patent laws, high bureaucracy levels and mistrust of institutions.

However, we strongly believe If you want all the money, it will be here for the pioneers who unlock the mysteries of success.

If you want to have an altruistic positive impact, the people here are the poorest in the world and can benefit the most from innovative products.

If you want to build something beautiful, you will be operating on a blank canvas, building in a green field that doesn’t have to compromise with legacy systems or legacy thinking.

The challenges are huge, just as they were for America’s forefathers who decided to leave an atrophied Europe in the hope of a brighter future.

Yes! it is true access to capital (or lack thereof), shoddy infrastructure, rampant corruption and overbearing bureaucracy all present huge headwinds that should intimidate any entrepreneur.

However, places like Lagos, with its strong rule of law, ease of doing business can be a test kitchen where start-ups can launch, iterate, and then scale into larger markets.

When we started searching for a product to market fit last year. We were looking into an African future. This can be a future full of missed opportunities, with mass unemployment and continuing failure for the world’s poorest countries to give their people the opportunities the developed world takes for granted.

On the other hand, it might just be that Africa’s current unemployment problems can also provide opportunity, a continent where innovative ideas for huge markets that have high impact can thrive and conquer. The choice for us is not passive.

Africa is in dire need of ICT pioneers who will be a critical determinant in choosing which future it sails toward.

Our Destiny is in our hands not the west or our colonial ties. Yes at the moment, Africa comprises of countries where students do not study, workers do not work, ministers do not administrate, and where cunning religious clerics & online fraudsters hold the order of the day.

However, it will be terrific for the future of the continent to finally discover a fast-growing army of young career-savvy people– some of Africa’s finest self-made intellectuals, strategic thinkers & career leaders of struggle who notoriously do not rely on their respective governments, who confront misfortune – not by crying, making up excuses & low-esteem – but with a smile taking it in their own style, that is, with humour, swag & a rugged determination to make a difference.

Like China has already demonstrated. Over the next 20 years, Africa will walk down the same path. We believe if we can scale our skill empowering, marketing & business-creation programs as more and more African SMEs and busy professionals continue to outsource part of their operations online; a large chunk of unemployed Africans will be on their way to self-sufficiency living off their skills and the African middle class will grow.

And as the middle class grows and business environments become increasingly wealthy and stable, SkillPatron will continue to churn out more entrepreneurs in Africa’s nascent tech startup scene.

We will be happy to hear your thoughts

We are pioneering a new labor model for a rapidly evolving workforce.

We are a startup that is changing how individuals get work done & how businesses operate by delegating strategic tasks to our team of highly trained Project Assistants who strive to provide our clients with the best services on the planet.

For customers
For vendors
Sign Up for Weekly Newsletter

The most preferred “fully managed” online marketplace for outsourcing services to Africans.

We now accept Zelle, CashApp, Venmo, Apple Pay, Google Pay & Local Bank Transfers. N.B: if you don't notice activity 5 minutes after placing your order, chat or ring us up on our WhatsApp: +1 (218) 329-1726 Dismiss

How can we assist you today? Also, if you don't notice activity 5 minutes after placing your order, chat us up here.